“A journey is a person in itself; no two are alike. And all plans, safeguards, policing, and coercion

are fruitless. We find that after years of struggle that we do not take a trip; a trip takes us.”

Camden Locks, London Leather Shop - On a trip to London, England we popped into a leather shop in Camden Locks area of London. Sue found this amazing leather backpack & while they were wrapping her purchase up for our trip the store owner and I chatted for a while. He asked us why we were in London and we explained that we were here for an advanced haircutting class and had a free day to explore London. He asked us where we had traveled to, how we like travel & I explained that we always learned a lot while traveling.

He didn't want to make his father angry by questioning him in front of the shop owner so he waited until they were on the way home and asked him why he couldn't buy the only pair of shoes that he really liked. His father explained to him that if he waited until after his report card came out and if he got an A he would buy that pair of shoes for him. He said that it was a great lesson to him not to just settle for that thing that was in front of him in the moment, but to wait for something that he really wanted and to then buy that. What a great lesson. He worked hard, made good choices and now he owns his own leather shop in London. Great story, great lesson. 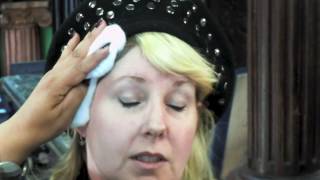 Things that make you go hmmmm?

But you didn't answer my question...

Three Types Of Students, or What-EV-rrrr

Dolphins - Things We Learn While Traveling #5

Gondola - Things We Learn While Traveling #4

Terroir - Things We Learn While Traveling #3

What Do You Do In An Emergency? Turn Out The Lights And Have An Espresso! - Things We Learn While Tr